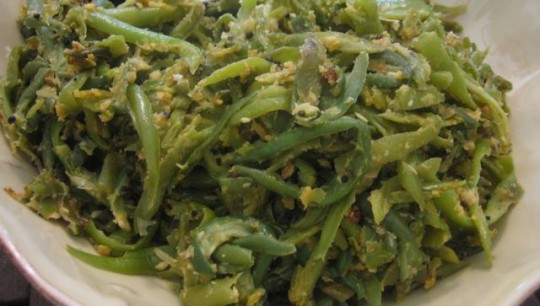 My dad made french style green beans almost once a week growing up, usually as a side dish with rasam or sambar.  We accidentally discovered that we liked them just slightly blackened when he sauteed them a little too long once and more than a few got singed.  I think to this day my sister makes them just a little blackened (although I can’t say if it’s intentional or not!).

Until this weekend, I had never cooked my dad’s french style green beans.  He always uses the frozen variety, but on Friday I went grocery shopping and carted around the fresh produce aisle looking for this particular variety of beans thinking I would make them “fresh”.  I couldn’t find anything of a similar name or look, so I perused the frozen food aisle.  My eyes landed on the beans I was looking for, and I laughed out loud as I read the label which said “French Cut Green Beans.”  I never realized these are just regular green beans but julienned “french style”.

No doubt some of you out are probably thinking I am totally clueless (!), but I guess this is one of those things that I grew up with and never had reason to question until now.  It’s kind of like how I thought “fushcloss”and “ayyyvuhn” were words for “great” in the Telegu/Tamil mix my family speaks only to realize they were just an accented pronunciation of “first class” and “A one” or that antenna was pronounced “en-ten-ugh” after spending my formative years in the South.

Although this mystery isn’t officially solved because there is apparently a variety of green bean called “french beans” and the “french style” or “french cut” refers to thinly cutting french beans and removing the string.  I found the frozen, french cut variety to be delicious and simple, so as far as I’m concerned, they are A-One.

Serve these French Style Green Beans with a side of sambar or rasam and fresh basmati rice or upama. 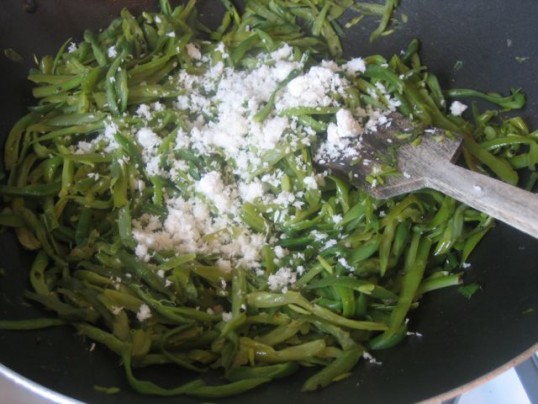